Hi everyone. I have moved the Phalaenopsis aphrodite (amabilis) clone ex-vitro to its own little pot. I could barely get it out of the flask it had grown so large! I have attached a string of images below to show its progress from a little green blob to a healthy young clone in 4 months.

The other clones are also doing very well with more on the way. The others include P. 'Brighton belle', a large white Phalaenopsis and a no ID hybrid with psychedelic patterning of the flowers (see pics). I should have an excess of these clones later this year so if anyone is interested in a swop or to purchase, let me know.
﻿


Posted by Dr David Vaughan at 5:02 AM No comments:

The wait is over!

I am so excited! The first blooms of Doritaenopsis Purple Gem "Blue Bird" have opened. I have been waiting to flower this hybrid since I purchased it in July last year. The wait was certainly worth it. The flowers are tiny and probably the same size, if not a bit smaller than those of Phalaenopsis equestis - another species I am on the hunt for. If you are unfamiliar with this species and its flowers click on the name which is linked to an image. The flowers of both are just a little wider in diameter than a 50c piece.
The plan for these flowers is simple. I will attempt a cross pollination with P. Golden wonder once more flowers have opened and matured and depending on the success of fertilisation I will either have a few developing pods to dote over, or I will clone the nodes on the stem (new media prepared just in case last night). So, I am organised and very happy indeed. Do enjoy the image.
Posted by Dr David Vaughan at 9:30 PM No comments:

Happy Valentine's Day to everyone! I trust you will be enjoying yourselves and spoiling your loved ones accordingly.
Yesterday I finally managed to take some more images of some plants that are just starting to flower. Without fail, Phalaenopsis Golden Wonder has sent out a huge spike of particularly impressive blooms again but I am still waiting for the "blue" Doritaenopsis to open its buds. I must say that I am rather impressed with this little Doritaenopsis as you will see in posts to come. It is a small plant but the spike is almost as long as that of P. Golden wonder and it is carrying 12 buds. I am looking forward to its first flowering and of course trying my hand at hybridising it with P. Golden wonder and another unidentified rescue Phlalaenopsis which will also flower soon for the first time. I have included an image of one of my flowering Stenoglottis hybrids. I have been battling to pollinate the flowers because they are so tiny but hopefully those first 3 spent blooms on the spike are now fertilised successfully and should produce seeds.
I also thought it might be useful to some readers to include some of my own stats on germinating and media used. I have included in table form a short summary of what orchid species (hybrids not included) I have managed to germinate and the different media I have used. Some terrestrial species germinate faster on BM-1 full strength than MS half strength. This is particularly true for some of the Summer rainfall Disa species and is possibly attributed to the critical role that water plays in their germination. MS medium is high in various salts which could be lengthening the time to germination due to the increased dissolved salts affecting osmosis. Please excuse the minor typos in the text below. The PDF converting to JPG did not agree with the word Stenoglottis and has omitted some spacing between words. 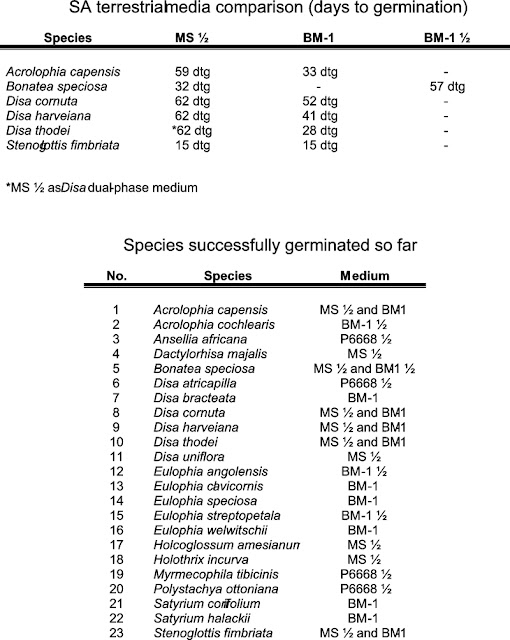 Posted by Dr David Vaughan at 10:00 PM No comments:

I had some contamination in one of my Ansellia africana flasks recently and had to evacuate the seedlings prematurely into a compot of sphagnum moss. I was not sure how well they would take to suddenly being removed from their comfortable flask but two weeks on they are growing nicely and all doing very well. The other flasks are all fine and also growing rather well although they are getting a bit crowded now (see image below). I  might have to split these up in the near future to optimise growth.
﻿
﻿﻿﻿

﻿﻿The Dendrobium delicatum protocorm flasks were moved to the greenhouse to see how they would fare with the increased light intensity (natural lighting). They exploded into numerous dark green shoots and undifferentiated protocorms multiplied into callous-like tissue. Each one of these calloused protocorms is now shooting multiple shoots from each protuberance (see below centre of the image). These plants obviously appreciated the increase in lighting intensity and I will keep updating the blog on their progress.﻿﻿
﻿

﻿﻿﻿Yesterday my second flower of Phalaenopsis "Golden wonder" opened and the Doritaenopsis "Blue bird" is just about ready to open its first flower. All the Phallies are doing incredibly well and this might be the combination of a regular fertiliser regime with Nitrosol and the high temperatures (exceeding 32 Degrees Celsius). I will post images of new flowers soon!
Posted by Dr David Vaughan at 4:35 AM No comments: