Beautiful Dendrobium lindleyi and potting up my Polys

Last month I bought this Dendrobium lindleyi from Duckitt's, mislabelled once again as its synonym D. aggregatum. The plant was just sending out two small spikes when I bought it and these have since flowered with more spikes developing from other pseudobulbs. The flowers are delicate but very beautiful. My D. lindleyi seeds that I received from Thailand have also since germinated and are all doing very well. This species likes a little more light than I am currently giving it but as soon as the cooling system is configured and running properly in the new greenhouse I will move it accross with most of the other stock plants.
With the first day of Spring just a day or so away, I have potted up my Polystachya ottoniana seedlings. They have done very well and I have moved some to rafts and the others I have compotted until I have more space to move them to mounts. These seedlings germinated on 22 November last year, so they are approximately 9 months old.
Posted by Dr David Vaughan at 5:38 AM No comments:

I decided to put the new greenhouse up recently and have been working on it in my spare time. I have run out of space in my original greenhouse which is partly my reason for setting the new one up already. I was going to wait until we had moved to the new farm but my family and I might still be here at the old farm for several months yet as we wait for our home to be built. So, with the help of Bradley we got the frame up and I subsequently put on the polycarbonate panels and have started working on the interior. A major challenge is going to be cooling, especially during Summer. I will be installing a wet-wall down the centre of the entire length of the greenhouse that will be run by a temperature controller. Everything is being made simply and with future moving in mind. Everything either bolts together or is screwed in place for easy removal and reassembly. I am looking forward to having it complete and with plants in it!

Some of the Phalaenopsis plants that I received from Nollie with buds have opened some flowers. Some of these will be larger when they flower next season but the colours should be similar or the same. I have included a few images below. I have also included an image of my first flower from my Satyrium odorum that grows here on our farm. It is quite an insignificant looking little beastie but I still find it an interesting curiosity. Next to flower will be my Dendrobium lindleyi, Cyrtorchis chailuana and Aerangis modesta.

Posted by Dr David Vaughan at 11:24 PM No comments:

Spring is in the air it seems. The incubator is springing to life with many more new mother flasks of various species germinating at the moment. Some of the Dendrobiums from Thailand have begun to germinate already and older protocorms of Dendrobium sp. (likely ravanii) from Mindoro Island, Phillippines, and Bradley's Mystacidium capense are starting to shoot their first leaves. No doubt I will be posting some more images of more species to germinate in the coming future while in the mean time I await some more seeds from Thailand. My Holcoglossum amesianum clones are progressing nicely but these will take some time yet until they are large enough to mount.
﻿
﻿﻿
﻿﻿
﻿﻿
﻿﻿
﻿

Last week I also received some new Phalaenopsis hybrids from Nollie. Two of these (P. Taida Salu KHM101 and P. I-Hsin Picture KH7357 #6) are deep reds. Others include P. Little Gem Stripes, Dtps. Sogo Robert, Dtps. Sogo Passat, Dtps. I-Hsin Golden Peacock, and P. Tsu Chiang Balm (my personal favourite). In addition I also purchased a Holcoglossum wangii and Rhynchostylis gigantea "spots" from him as well. I will post some images of these in future.
Posted by Dr David Vaughan at 10:54 PM No comments:

Oncidium flexuosum and others

One of my first orchids, my Oncidium flexuosum, is currently flowering. The flowers are an interesting contrasts against the backdrop of all the Phalaenopsis blooms in the greenhouse. I have selfed some of the flowers and have also attempted a cross with Anancheilium cochleatum. The Oncidium is a species from Brazil and Argentina and has beautiful little yellow flowers. I find the plant rather messy and it seems to want to grow all over the place in an unstructured manner but it grows relatively quickly. I purchased my plant about 10 years ago from Else Hall when Stellenkloof Orchids was still operating just outside Stellenbosch. The inflorescence contains many nodes and I have attempted to clone these in the past using the same methods established for Phalaenopsis stem props. However, these nodes seem to always develop into an additional inflorescence with buds. I am yet to get them to produce plantlets.﻿﻿﻿﻿﻿﻿﻿
Recently I was very fortunate to be at the Duckitt's Open Day on 6 August. There were many different varieties on offer and I was most impressed with the selection of Aerangis species. I picked up a lovely little Dendrobium hybrid with no name and was later told by Richard King that it possibly has D. tetragonum and D. speciosum parentage. Richard inivited me around to view his collection that morning. He has the most beautiful home! His orchid collection is impressive and they look so natural and happy. He must have fun spending time in his greenhouse. I know if it were mine I would spend hours in there every day. One plant that was in flower which I thought was immensely beautiful was a very large Laelia anceps. Duckitt Nurseries has their annual show from 15-18 September in Darling. I might take the opportunity to take the wife and kids through again this year.
The seeds I ordered from Thailand have arrived in drips and drabs in the post but are doing well in vitro. So far I have kept contamination down to a minimum so I am hoping to have some interesting species germinating in the not too distant future. Then, from early September I have many Phalaenopsis pods to harvest and I have been looking forward to sowing these for nearly 6 months already! On pods, I have included an image below of a developing Angraecum sesquipedale pod which took successfully earlier this month.
Posted by Dr David Vaughan at 11:06 PM No comments:

My little Disa bracteata have just started to flower now. I have been waiting for them and watching daily for signs of budding. These little locals are not very much to look at but maybe this is just because their flowers are so tiny and because this species has a bad reputation for being an invasive species in Australia. I think it has much charm and the flowers are simple and yet they also have elegance. This species has been, and continues to be a good surrogate for learning about the requirements of growing Disas in vitro. The flowers are self-pollinating and last year I sowed a mother flask of dry seeds from the same plants. The flask is doing quite well but the seeds did take a long time to germinate. On the farm Disa bracteata grows together with a Satyrium sp. and Holothrix villosa(?) in a relatively small area. It makes me wonder whether they all share the same symbiotic fungus. I find it somewhat ironic that D. bracteata is considered an invasive species in Australia given all the Aussie invasives that we have here - and they get an orchid!
On Aussies, my Pterostylis x furcillata tubers are shooting nicely and growing very quickly indeed. I hope they flower so I can enjoy these odd little orchids. I have some other Pterostylis spp. seeds in vitro but none hane germinated just yet.
Posted by Dr David Vaughan at 10:25 PM No comments:

Finally, after 8 months, I removed my Bonatea speciosa seedlings and potted them up last night. The dry seeds were bought from Lifestyle seeds (Eastern Cape) and were sown on 9 December 2010 on half strength MS with added coconut water and carbon. They began to germinate on 11 January 2011. The odd protocorms first spread out laterally on the surface of the medium before eventually sending a dropper down from which the leaf primordia developed (see images). The seedlings grew relatively quickly and were incubated at 26 Degrees Celsius under fluorescent light (white light) for 16 hours on/ 8 hours off. I did not sow many seeds as I only received very few in the post. Germination was low but those which germinated all survided (4 plants). I have been looking forward to potting these up and will keep them in the incubator for a while to harden off before moving them to the greenhouse in Spring.
I am also very excited to add that I have ordered many different species seeds from Thailand, Bulgaria, The Netherlands, Australia and the UK. Hopefully within the next few months I can add a bit on what was sown, what may have been successful and what will be on offer in flask in the future.
Posted by Dr David Vaughan at 4:51 AM No comments:

Hello! I have been busy hybridising in the greenhouse and decided to try some intergeneric cross pollinations. The Eulophia parviflora that I recently got from New Plant Nursery has flowered so I decided to cross it with Ansellia africana and the pendulous green mini Cymbidium that are also in flower now. I could not resist crossing A. africana with the Cymbidium as well! I will be keeping a close eye on these to see if they are accepted. I do hope that they are. I have included a few visualisations of the crosses performed. I have also cross pollinated Polystachya Duckitt Limelight with Doritaenopsis (Phalaenopsis) Purple Gem 'blue bird' and this cross has already produced a swelling pod which is already 2 months old. These two genera (Polystachya and Phalaenopsis) are distant relatives of the same tribe (Vandeae) so I guess it will be rather interesting if the cross is indeed viable. 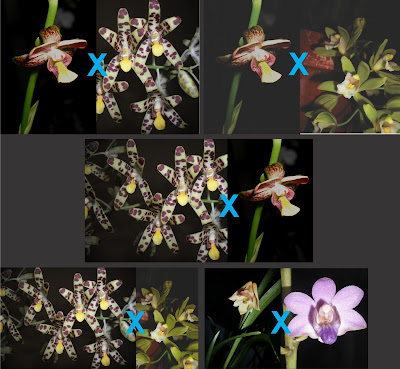 Recently my Angraecum sacciferum green pod sowing has sprung into life after about a month of incubation. I hope to raise some seedlings for offer in the near future.
I must add here a HUGE thank you to Bradley for all his help dismantling and delivering the greenhouse which I purchased from an elderly gentleman from Worcester. The structure is very large (5m long, 3m wide) and came with all the trimmings and a whole lot of plants - mainly Cattleyas (species and hybrids). The plants need some work though and I have already begun tending to their needs. The greenhouse remains in pieces, awaiting reconstruction and some modifications. It is getting a brand new covering of polycarbonate multiwall which arrives this week. Then it is Duckitt's again this Saturday! I hope I don't bring home too much.
Plants about to flower in the greenhouse include Angraecum sesquipedale, Aerangis modesta, Oncidium (something or other), Satryrium (something or other) and Disa bracteata.
Posted by Dr David Vaughan at 6:10 AM No comments: