I got an Ascofinetia hybrid four yeasrs ago while I was living in J bay. It has been a healthy strong plant since I have had it and seems to adapt to various climate  situations very well. I got this plant labelled as Ascofinetia Peaches which is all good as it had light orange flowers when it first flowered in my care and another spike of orange flowers the second time. Last year it did not flower as we moved from J Bay to Cape Town and then to Worcester where it is now happy in its little corner of the shade house and has rewarded me with some flowers. This time around though they are more on the purple side and not the light orange they normally are. I am not complaining as I like the variation.

Also a plant I have been excited about has finally flowered for me recently. I am still not 100% sure which species it is but it definitely belongs to the genus  Epidendrum. It is a good size specimen plant with canes about 60- 70cm long. Flowers are produced from terminal spikes that re flower from bract's the following season making an impressive display on the long canes.
The well known poor mans orchids are very common in gardens in South Africa and are a bit overlooked in the orchid community. I grow them in pots outside the shade house in the garden. They are almost always in flower and make great specimen plants if grown in hanging baskets or in the garden near a tree. 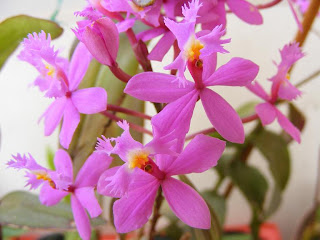 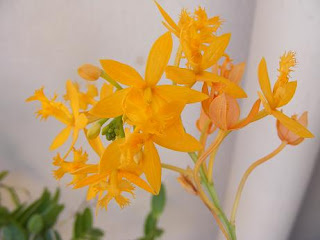 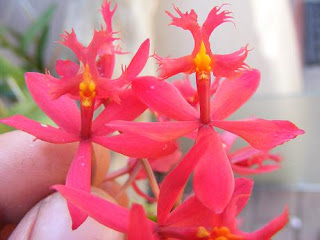 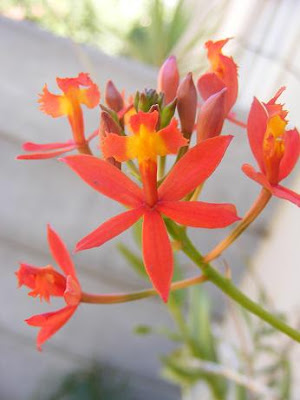 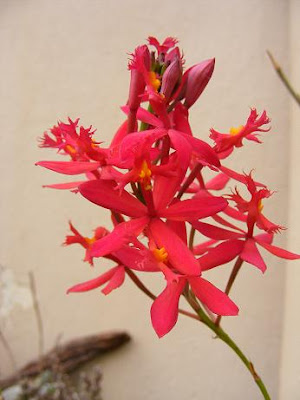 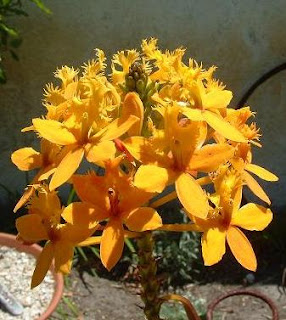 I also found this little frog Hyperolius horstocki in a wild garden in Bettys Bay this last weekend. This pic just does not do it justice as it is a brightly colored light brown and orange guy with black stripes down the sides of the body, one from the tip of the nose and the other from the eye. A dark brown coloring in between the two stripes fades midway to the back of the frog.

It has been some time since my last post on the blog, partly because my plants have slowed down significantly in the greenhouse with the onset of the colder weather this Autumn, and partly because I am preparing to move to a new farm in the next few months. Preparing to move all my plants is rather stressful and to make things worse is that they will be moving in Winter and the greenhouse will have to be dismantled and re-built. The plants will be living in the garage during this time and although they will probably take a knock, I am hoping that some heating and some good lighting in the garage during this time will be enough to see them through.
I had recently been eyeing out some long mats of aerial roots descending from lateral branches of some mature Ficus sp. in Stellenbosch at a facility which I visit on a monthly basis for training as part of my job. I took a hacksaw blade along with me and asked permission to remove two of these mats. I was keen to see if they would make for good mounts for orchids - they cerytainly look interesting! I decided to try a large seedling of Laelia anceps mounted on a section of one of these mats.
I removed the Laelia anceps from its small pot and checked for signs of new roots. I positioned the roots of the Laelia anceps beneath a layer of some of the longitudinal rows of aerial roots which make up the mat from the Ficus sp. and secured it with fishing line. I then threaded a piece of galvanised wire through the top of the mat and secured it at the back, allowing for a hook to be attached. The mount was then strung up on one of my mount walls in the greenhouse. I hope the plant likes the mount. I am keen to try some other species on the same material, especially some Dendrobiums when they are large enough.
The colder night temperatures should soon start to influence my Dendrobium nobile. It has just started to lose a few leaves now and I have reduced its watering regime to dry it out. I hope it flowers for me this year. Some of the other plants that flowered late last year that I hand pollenated have produced some good pods that are just about ready for harvesting now. In fact, the Cyrtorchis chailuana pods I harvested just the other day when they turned a lovely shade of yellow. They were full of viable seeds and I have sown several mother flasks which I hope will germinate out. Other pods include Oncidium sphacelatum that will be ready at the end of April and Ascocenda hybrids with Rhynchostylis coelestis and Phalaenopsis aphrodite.
Posted by Dr David Vaughan at 11:41 PM No comments: