In shades of green

My first flower of Satyrium odorum opened today after waiting and watching carefully. These flowers are small and quite drab compared to some of the other more visually pleasing species like S. carneum and S. coriifolium. The reason lies in its pollination strategy. Satyrium odorum does not need to spend huge amounts of energy to create visual advertisments to attract it's pollinators like the other two species mentioned previously. They are pollinated by moths and to get this right they give off a stong scent which is particularly strong at night as you would expect. The smell of the flowers (at least the ones I have here in Hermanus) are strikingly familiar and remind me of a mix of bubblegum and clove oil. Not unpleasant at all. That said, the ones on the west coast on the farm I lived on previously smelled very different. These plants' flowers smelled strongly of Port Jackson pollen - not a pleasant smell at all. I wonder if anyone has done any research on this? The difference in smell may be related to the type of moth being attracted in the different areas. Something to think about. 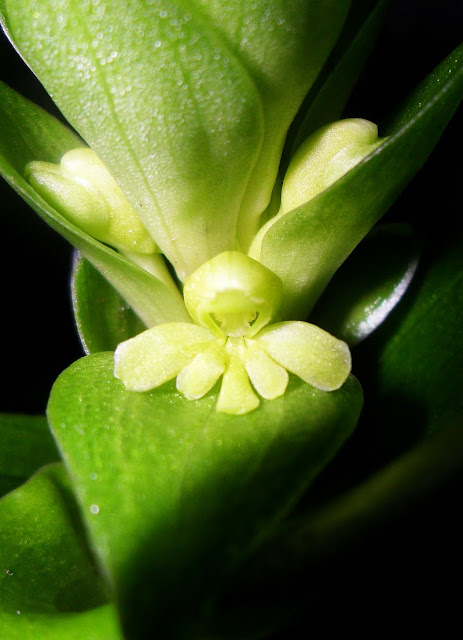 The other shade of green comes from an intermediate-sized Cymbidium which I have which is flowering now. The plant is a medium-sized plant but the flowers are small and short and the inflorescence is actually pendulous. This year I decided to prop it up to see if I could get a different presentation. I have made a note to leave it alone for next year. The flowers are prettier when hanging over the pot. 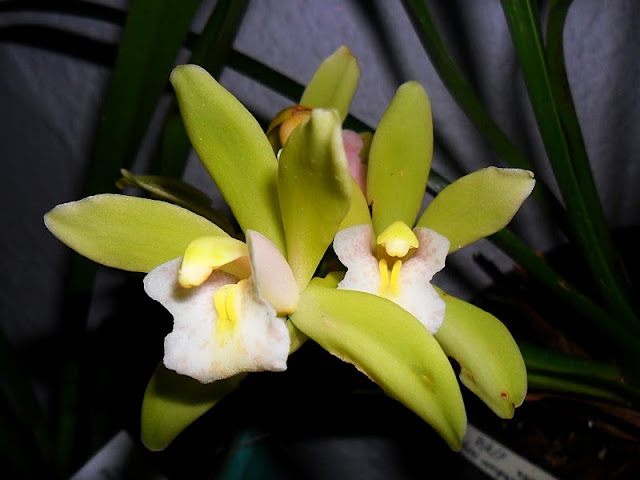 The next shade is of course from my Dendrobium speciosum inflorescence. This one is going to look good in flower! 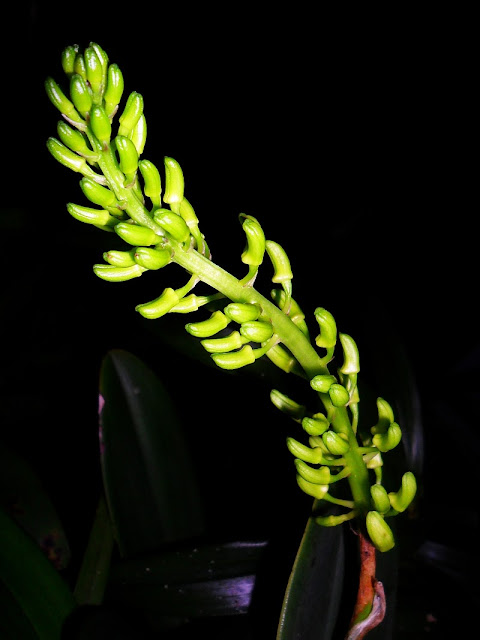 Lead me not into temptation... unless you are paying

Given the fact that my growing conditions have not been up to scratch this winter you would think that the last thing I should be doing was adding any plants... I tried very hard to resist recently but after a few days of saying "no thanks" I succumbed to the temptation of some stunning Phalaenopsis species recently put on offer by Plantae. I actually feel rather guilty. But anyway, I now have to make a plan to ensure that my new plants are given the correct growing conditions. I purchased the following species:
P. amabilis (the REAL one, not P. aphrodite with a wrong label) - some SA orchid judges and well known personalities still can't get this one right! (my rant for the day).
P. bellina
P. cornu-cervi f. chattalandae
P. javanica
P. lobbii
P. stuartiana
P. tetraspis"C1" (which is actually a synonym of P. speciosa var. Christiana)
P. violacea var. coerulea
Nollie from Plantae kindly added a specimen of the primary hybrid P. Anna-Larati Soekardi (P. pulcherrima X P. parishii). This particular specimen has a particularly dark purple lip which I think contrasts well with the rest of the flower.
I cannot explain how I did not manage to resist the temptation to buy these new plants. I simply could not. Orchid cultivation and collection is a disease and one without a cure. Maybe it's more of an addiction. I feel satisfied each time I get a new plant, it's like a temporary fix. I am doomed to keep orchids forever!

This season's new growth and some flower promises

This Winter has been particularly bleak for me. Many of my plants suffered and continue to suffer from a serious lack of light where we live. I had to install a 500W halogen floodlight in the greenhouse temporarily just to supplement a bit of light to those plants which were worst affected. This seems to at least be working to reduce some damage but I have lost a few of my angraecoid orchids. They seem to be a lot less tolerant of poor lighting then many others. To top it off I seriously burned my fingers yesterday when I accidentaly grabbed at the floodlight while wanting to open the greenhouse door while looking at some seedlings - silly me! At least my spirits were lifted when I observed the growth of some of my terrestrials and some other plants which are preparing to hopefully push out some flowers in Spring.
I have been most impressed with my Disa uniflora which when I got it was still quite small and I potted it up into a shallow transparent rectangular polypropylene tub, the kind you can buy for storing food in the fridge. I made up media made from 1/3 palm peat fibre, 1/3 washed river sand and 1/3 aquarium silica gravel. On top of the medium I placed a couple of clumps of moss. The whole tub was then placed inside a plastic ice cream tub containing about 1cm deep aquarium silica gravel which is kept wet. There are of course many holes dilled in the polypropylene tub for excellent drainage and air movement. After flowering in January this year some new shoots began to appear (see image). I also sprinkled some selfed seeds onto the moss to see if I could encourage any seedling growth. The next image was taken just yesterday. As you can see the Disa has spread under the medium and has began shooting all over the tub. If you look closely you can also see some of the tiny seedlings that have begun growing from the sowing. It looks like I will need to split this chap up in the next season or two. I had a look under the tub to see how much it has spread. It is amazing just how extensive the plant has spread. There are even shoots trying to push out the sides! So what is the secret then? Well, to be honest this is actually my first real attempt at keeping Disa uniflora. I had kept a hybrid before many years ago which I duly killed but I have recently begun to appreciate the needs of this and other terrestrial species. Once you have an understanding of what they like it is much easier. For Disa uniflora anyway they enjoy cool conditions. Mine grows in its tub outside under cover with no direct sunlight. I keep a thermometer with the plant to keep an eye on day and night temperatures. During the growth this season the minimum temperature has been 7 Degrees Celsius and the maximum 18. Summer was a different story. Minimum was 17 or 18 Degrees Celsius and maximum was 34. Humidity? Not sure really... I guess it would be moderate since I live close to the ocean but the moss on top of the medium also increases the surface area for evaporation and therefore the immediate humidity at the plant would likely be more constant. In Summer I watered the plant daily with either rainwater when it was available, or reverse osmosis tap water. Now in Winter I am watering only once a week (if that) using rainwater which I collect from my roof. The plant's root system in the medium I can observe because the tub is transparent so I can keep a close eye on how damp things are. I fertilise with a dilute-strength Nitrosol and magnesium sulphate every two weeks.
﻿

﻿
My Bonatea speciosa plants are getting ready for Spring now. Each large growth has a developing flowering head which I am hoping will each produce a large inflorescence. Even my little seedling from my first batch raised from seeds is getting ready to produce flowers. This year I will be focussing on this and other South African orchids and after much tweaking of media preparations I now have the media requirements for B. speciosa at least down to an art. 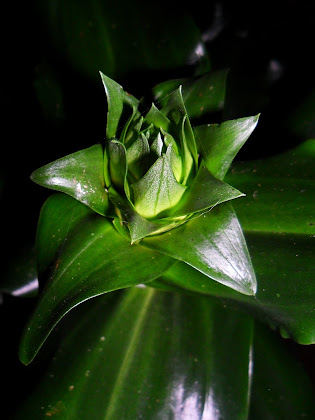 Currently, my Dendrobium speciosum is pushing out some buds which is great news - I love this species (-complex). The slugs and snails seem to as well judging from the damage to some of the buds sustained the other evening before I evicted the culprit. My Stenoglottis species are also all shooting now and once again I had to evict another slug from my S. woodii just last night. I actually only saw it when I took the below photo! Thank goodness for flash photography :). I received some advice this afternoon actually, regarding snails and slugs from a fellow plant enthusiast whom I work with. She said that she had read somewhere that a layer of vaseline along the rim of the pot discourages slugs and snails. I will give it a shot. Although I don't like it, I do sometimes use snail bait when I am under severe attack. My guilt usually subsides after I tally up the plant damage... 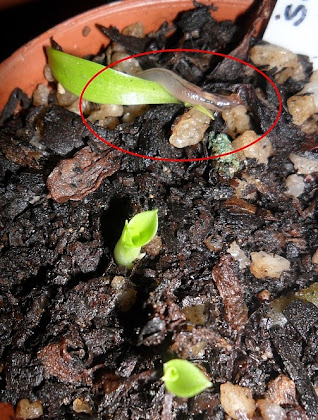